5 Best Things About Owning a Home 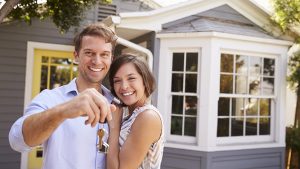 Since homeownership is ranked at the same caliber as a graduation or marriage in terms of life-changing events, it’s no surprise that for some, taking the jump into having a home to call their own can be an intimidating process. When all is said and done though, homeownership provides a number of benefits that not only enhance quality of life, but also improve financial stability. We’ve compiled a list of what we consider to be the greatest benefits of homeownership:

A home is a place where many people express feeling the most safe and secure. Also, homeowners explain that they have more freedom to do as they please compared to living as a renter. This is because homeowners are not subject to inspections on their premises by a landlord and have the freedom to paint, alter, or increase the security of their home virtually any way they wish.

Being able to settle into a home for years to come rather than having to hold on to the possibility of moving between different rental units also increases stability, particularly among children, since being a homeowner means that there is a decreased chance that you and your family will have to change jobs and schools and settle into new social and learning environments.

As we mentioned, homeowners can more easily remodel their home and make both cosmetic and functional home improvements than if they were still renting. Making changes to a rental property usually requires long and arduous arrangements made between those inhabiting a property and the landlord, but if the property is owned, homeowners can cut through any red tape and make home improvements based on their own preferences.

Additionally, not only do homeowners have the ability to make home improvements for aesthetic purposes, but they can also make improvements that will serve as a valuable investment down the road. Renters do not gain any sort of monetary value when they improve the property that they live in, but as an article from the Winter Park/Maitland Observer reports, homeowners have the freedom to strip the interior bare and rebuild it entirely, investing in remodels and upgrades that can significantly pay off in the long run.

One of the immediate monetary benefits of purchasing a home is the ability to deduct most or all of interest payments made on a home loan, property taxes, and loan points. This is because in the early years of owning a home, most monthly payments go towards interest payments.

According to the MIT Federal Credit Union, interest on first and second mortgages, home equity loans of up to $100,000, and refinanced loans are all deductible and local property taxes are deductible in the year that they are paid. Homeowners may also deduct state real estate taxes paid on an owner occupied home.

Becoming a homeowner allows you to dramatically increase your net worth due to home equity from selling your home years down the line. Home equity is considered to be the current market value of a home minus any outstanding liens or home loan balances and according to Harvard University’s Joint Center for Housing Studies, the rate of return on a housing investment significantly increases the longer it is held.

The majority of a homeowner’s wealth is made from a home’s equity and as Real Story, a New Jersey real estate commentator states, in the future, homeowners can use home equity that has been built up to get cash for emergencies or to purchase items for home improvements thereby possibly increasing a home’s net worth even more than before.

Along the same lines of increased tax advantages and home equity, homeownership also allows homeowners to increase their long term wealth drastically more than those who choose to rent. As seen over the past few years, it is evident that fluctuations in the housing market can temporarily decrease the value of a home, but in the long run, investing in a home is a valuable financial decision leading to a significant increase in home value in the decades to follow.

Every three years, the Federal Reserve conducts their Survey of Consumer Finances in which they collect data across all economic and social groups. Their latest survey data covers responses from 2013-2016. That study revealed that the median net worth of a homeowner was $231,400 – a 15% increase since 2013. At the same time, the median net worth of renters decreased by 5% ($5,200 today compared to $5,500 in 2013). These numbers reveal that the net worth of a homeowner is over 44 times greater than that of a renter.

Closing on a property for the first time is a tremendous accomplishment and represents the hard work and responsible choices of the new owner. When you invest in your future through homeownership, the possibilities are endless. It’s a rewarding experience through which families build lives and memories, as well as their financial futures.